The farmers claimed that the move was motivated by the fact the KTDA offered better returns to small-scale farmers as compared to the multinationals.

According to KTDA region 5 manager, Mr. Charles Manegene, KTDA provides better returns and service to smallholder tea farmers as well as other important requirements like cheaper fertilizer and extension services which has encouraged farmers who had left to come back.

“Despite coronavirus affecting business including the tea sector, we still maintain better services to farmers as compared to other companies. If you compared us and our competitors, KTDA tops in terms of payments to the small-scale tea farmers.Apart from better prices, we also support the farmers with other important incentives such as low-cost fertilizers. Farmers have realised this, a reason why more and more are coming back to us.,” he said.

Farmers in the region lauded KTDA for improving services at the factories which they said had encouraged most of them to seek read mission to the factory. They added that KTDA offered better prices for tea purchased from smallholder tea farmers than the multinational companies and that there was also better efficiency at the tea buying centres citing that they spent little time which is encouraging. 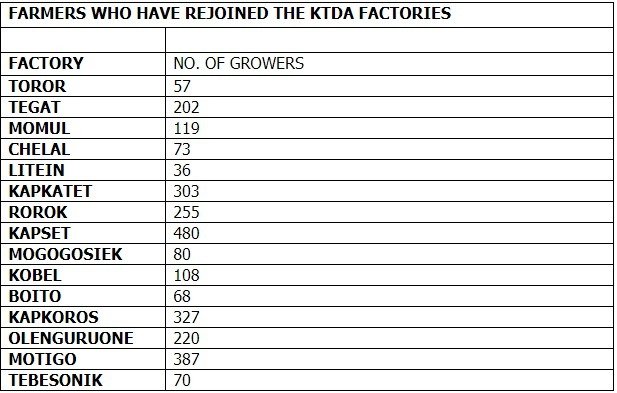 KTDA is owned by about 600,000 smallholder tea farmers spread across 16 tea growing counties in Kenya. The farmers are shareholders to 54 tea companies that own KTDA Holdings and its 8 subsidiary companies.