There is a growing fear that Multinational tea companies may pack their bags and leave Kenya the world’s largest black Tea exporter because they can’t bear the very high and yet unrealistically increasing cost of production in the tea sector. “We cannot sustain business the way things are at the moment, yet the cost of production remains the same. We are looking at cutting cost by reducing the number of employees in the companies,” said Apollo Kiarii, chief executive officer Kenya Tea Growers Association (KTGA). Kenya Tea Growers Association is an umbrella body of the multinational firms. According to this KTGA the cost of production has remained high despite low prices as the international buyers have cut down on the volumes that they have been buying because of diminishing purchasing power. The prices at the weekly tea auction have been on a downward trend in the last couple of sales in what has been attributed to low demand of the commodity in the world market resulting from disruptions caused by Covid-19. Analysts argue that these threats by Multinational tea companies operating in Kenya will have direct negative effects in the East African Community member countries that also produce tea and heavily rely on the weekly auctions in Kenya. For example, Rwanda largely relies on the Mombasa auction market for most of its coffee and tea. Rwanda tea has always fetched the highest prices at the weekly Mombasa tea auction.

What Should Rwanda Do? Borrowing a leaf from Kenya, the world’s largest black Tea exporter, there are some best practices that can be picked and definitely introduce them in Rwanda’s Tea sector with the purpose of improving. Considering last year’s performance, produced 458.85 million kilograms of tea crop earning the Kenyans a total of U$1.16 billion from exported tea despite low auction prices. Around the same period, Rwanda’s National Agricultural Export Development Board (NAEB) reported that the country’s tea sector had performed very well after registering an 8% growth in revenue fetched from tea exports from July to November 2019. We are talking about a collection of U$36 million up from U$33.5 million the previous year. However, by then Rwanda target was to generate U$102 million (about Rwf93 billion) from tea exports in the 2019/2020 financial year, up from U$83 million it earned in the financial year 2018/2019. Statistics of 2019/2020 released in September indicate that Rwanda tea export revenues have generated more than U$ 93 million (over Rwf90 billion). Volumes exported increased by 7% from more than 30,500 tonnes in 2018/2019 to more than 32,600 tonnes in 2019/2020. Pie Ntwari, the NAEB Communication Officer attributed this upward performance of the Rwandan tea sector to relatively good prices at the international market last year compared to the previous one, as well as increased production. “There are new tea plantations which started giving yield. This enabled factories to process more tea for export,” he said, adding that Rwanda has 18 tea processing factories. Now, considering the factor of increased production, Rwanda should be looking into lowering the labour costs and possibly introduce tea harvesting machines although this may have a temporal effect on jobs of thousands of menial labour in the fields.

In 2005, Kenya tea sector introduced tea-leaf plucking machines aimed at increasing efficiency according to Sasini Ltd a publicly listed Agribusiness involved in the growing processing and marketing of Tea, Coffee and Dairy products. Originally the idea was to limit mechanized tea plucking to 3% of the total area on the farm while the rest would be for human labourers. However, application of this in Rwanda would require a careful assessment of the cost effectiveness vis a vis social welfare. Rwanda had earlier targeted to mechanise 25% of farm operations by 2017 with the aim of allowing one in every 4 Rwandan farmers to either own and/or hire mechanization services in their farm. However, 13% of farm operations are mechanized including land preparation, planting, crop treatment, harvesting, post-harvesting and agro-processing. 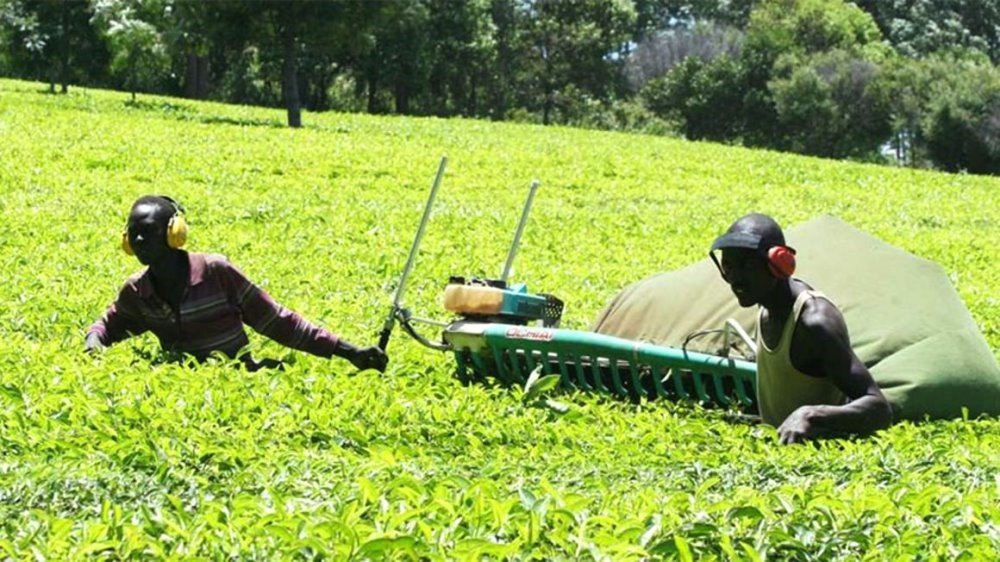