Mr Joseph Nyang’au is a man at a crossroads. For the past 15 years, he has been selling eucalyptus seedlings to Gusii residents and this has been his only source of livelihood. But a directive by the Kisii County government requiring residents to uproot the tree from riparian land has rattled him. His business has been on the decline, with buyers of his seedlings getting fewer by the day. The Nation caught up with him at his Bobaracho farm near Kisii town. He says many residents embraced the tree that is also known as blue gum about 15 years ago after tea and coffee failed to give them good returns. 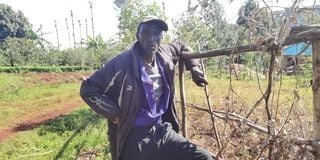 Mr Joseph Nyang’au at his eucalyptus nursery bed. He says he has sold the seedlings to Gusii residents for the last 15 years and a ban on growing the tree has rattled him.

Also, the Gusii region is characterised by small land sizes and residents have encroached on water sources, on which they have planted the trees. In the recent past, major sources of water in Kisii and Nyamira counties have dried up due to long dry spells.

Environment experts blame the situation on the millions of blue gum trees planted in the region, especially on water catchment and riparian areas. The tree species, which is to be found in virtually every family land in the region, is said to have led to the drying up of rivers and destruction of wetlands. Its roots, experts say, suck water from far and deep.

Over the years, residents have used it to drain swampy areas for resettlement and farming. But a dwindling water supply has seen the local assembly propose a law to tame the ‘thirsty’ tree species, much to the chagrin of timber merchants.

“I am bothered by the move by Governor James Ongwae to assent to the Kisii County Climate Change Bill, 2020,” says Mr Nyang’au.

The legislation is part of measures by the devolved unit to foster environmental conservation and mitigate the effects of climate change. Mr Nyanga’u says though the Bill has good intentions, it will see the county implement an existing executive order on the removal of eucalyptus trees from riparian areas and wetlands.

“The Bill will enhance climate resilience in the county, whose population is among the highest in the country, through development, management, implementation, regulation and monitoring of adaptation and mitigation measures and actions,’ said Mr Ongwae while signing the Bill.

Experts argue that the tree, which many plant as a cash crop along rivers and springs, poses a big threat to the environment and sources of water in the densely populated Gusii highlands east of Lake Victoria.

More than a year ago, Mr Ongwae called on the residents to remove the trees from their farms. This was after water levels in rivers Kegati and Gucha, which are a major source of the commodity for Kisii town, began to fall. River Gucha, which drains into Lake Victoria, depends on springs such as Kebacha and Riana River to boost its water volume as it flows towards the largest fresh-water lake in the East African region. Its water level has greatly reduced recently.

The residents have been selling eucalyptus tree trunks to Kenya Power, which pays good money for electric poles. In an advert last year, Kenya Power said it was conducting a survey to determine the availability of mature raw blue gum trees for use in ongoing and upcoming power transmission and distribution projects.

“We are, therefore, reaching out to tree farmers and plantation owners who have mature eucalyptus trees covering more than one hectare to declare the number of trees earmarked for processing into power transmission and distribution poles and the acreage covered by the trees,” read the advert. As debate raged on the tree, Mr Ongwae issued a county executive order for the removal of blue gum trees and structures that stand on riparian areas, wetlands and those near natural water springs.

This was during a public participation forum held in Nyamokomba, Kitutu Chache North. “I issued a directive for the trees that are planted along the water catchment areas to be cut down but we have a challenge in effecting the order,” said Mr Ongwae. He added, “I urge all the residents of Kisii and the general public to voluntarily support the initiative which is aimed at conserving the environment and restoring water sufficiency.”

“The county government has partnered with a number of State and non-state actors in sensitising the public on the need to support the removal of all eucalyptus trees from riparian areas and wetlands and replacing them with water-friendly tree varieties and plants,” said Mr Ongwae. In an interview with the Nation, Mr Samson Bokea, an expert in remote sensing, said the blue gum tree is to blame for declining water levels in major rivers.

Mr Bokea said the situation may worsen, especially given the residents’ reluctance to do away with the tree. “It is like gold to them. They have a ready market at Kenya Power, schools, tea and coffee factories,” he said. He explained that though the tree has a great economic value, it leads to land degradation as it does not allow anything to grow under it.

The tree, which was introduced in the country from Australia, takes a minimum of five years to grow. It was initially recommended for hilltops, rocky areas and where wind-breakers were needed. “But residents went against the rules to plant it in water catchment areas. Nowadays you have to drill a very deep borehole to hit the water level,” he said.