International Tea Day (May 21)was declared in 2005 by the smallholder tea growers, civil society organizations, traders, and trade unions in Asia and Africa to address the issues of the industry and ensure fair prices for smallholder tea producers. To mark this day, this article discusses the prospects of the tea industry and issues faced by producers and measures taken by the Smallholder Tea and Rubber Revitalization (STaRR) project implemented under the Plantation Ministry, the State Ministry for Company Estate Reforms, Tea and Rubber Estates Related Crops Cultivation and Factories Modernization and Tea and Rubber Export Promotion with the support of the International Fund for Agriculture Development (IFAD). 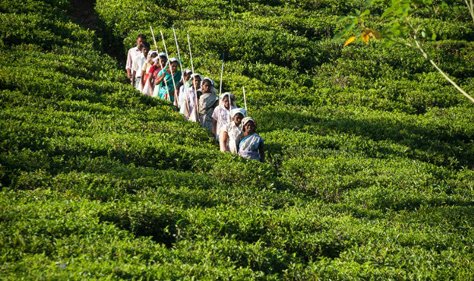 Tea was first introduced to Sri Lanka in 1839 with the planting of a batch of tea seeds in the Royal Botanic Gardens at Peradeniya (Weatherstone, 1986). The first commercial tea plantation was started by James Taylor in 1867 by utilizing 19 acres of land on the Loolkandura Estate in the Kandy district (Nathaniel, 1986). Taylor visited India in 1866 to learn the basics of tea growing as plantations to expand the tea cultivation in Sri Lanka. The first fully equipped tea factory was started by Taylor in the Loolkandura Estate in 1872 and the first shipment of 23 pounds of ‘Ceylon tea’ was exported to the London tea auction in 1875. From that point, Ceylon tea was exported to the London and Melbourne auctions regularly and its success led to the opening of an auction market in Colombo in 1883.

The tea plantations developed by the British were initially taken over by the government in the 1960s and thereafter these plantations were privatized and managed by plantation companies since the 1980s. With the decisions taken by the government of Sri Lanka from time to time after independence, land reforms took place and restricted the ownership of land size, especially for large plantations like tea, rubber, and coconut.

With the proposal made by the Member of Parliament in the Deniyaya electorate in the 1960s, it was possible for small farmers to start tea planting on small plots of lands such as half or quarter of an acre, and government subsidy schemes were adjusted to facilitate the smallholder to plant tea, especially in low country areas where tea had yet to gain a hold. From then onwards smallholder plantations flourished due to the higher return obtained by the small farmers on their investment until the last two decades, by which they contributed up to 75 percent (228 million kgs) of the total tea production in the country in 2018. The total extent of land under tea cultivation has been assessed at approximately 202,540 hectares and total production was recorded as 303 million kgs in 2018. It is estimated that about 500,000 smallholders are in the country and 51 percent of tea smallholders’ average land extent is less than half a hectare and 16 percent is above five hectares. 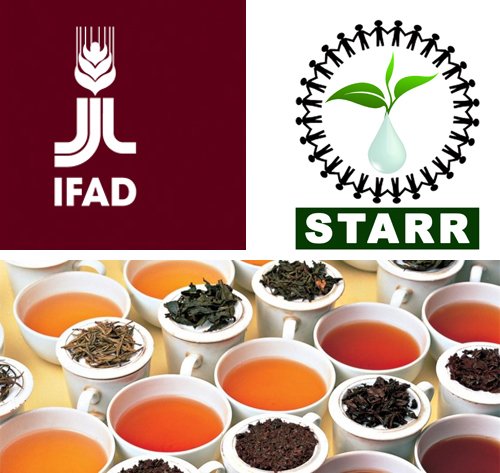 The tea industry serves largely as one of the major export earnings sources. Moreover, Sri Lankan tea has a unique place in the global market where Sri Lanka has gained popularity for its world-renowned ‘Ceylon Tea’. Sri Lankan tea in the world fetches the highest price due to its unique flavor and aroma. Many climatic parameters such as rainfall, temperature, sunshine, relative humidity, and wind velocity affect the tea yield, quality, and growth of pruned tea. Even within the country, Sri Lanka produces tea with different aromas and flavors due to its geographical and climatic variation in its tea-growing districts. According to the Tea Research Institute of Sri Lanka, the most suitable regions for tea cultivation are Nuwara Eliya, Ratnapura (Kalawana), Matara (Deniyaya/Kotapola), and moderately suitable areas are the Galle and Kalutara districts and some parts of the Matara, Ratnapura, Kandy, and Matale districts.

The country accounted for the world’s third-largest tea exports and was the number one supplier of Orthodox Black tea in 2018. Export earnings in 2018 were US$ 1.35 billion from the export of 272,000 MT of processed tea and the world market share of Sri Lanka tea was 15 percent. The tea industry employs over 1.5 million persons throughout the island and the majority of them are engaged as estate workers in large company-managed plantations.

Among the main tea exporters, Kenya remains the global leader with a 26 percent share (mainly Black tea) and China accounts for 20 percent of global exports (mainly green tea). Sri Lanka follows China in third place at 15 percent market share with India at 14 percent. The largest tea plantations are managed by China (63 percent) followed by India (13 percent), Kenya ( five percent), and Sri Lanka (four percent). About 16 percent of Sri Lanka’s arable land used for tea plantations and tea smallholders operate in 60 percent of the total tea land. According to the Tea Control Act, tea lands between 20 perches and 10 acres are considered as ‘tea smallholdings’ across the country.

For more than a century, Sri Lanka was the largest exporter of tea in the world and Sri Lankan tea continues to maintain a differentiated image in the world markets by its trade name ‘Ceylon Tea’. As Sri Lanka is one of the major tea-producing countries, unlike other major producers, the major portion of its tea production (approximately 90 percent) is exported to the world markets. The Sri Lankan tea sector employs more than one and a half million people in the country directly and indirectly. The tea industry also helps the Sri Lankan economy by earning about 15 percent of foreign exchange. Sri Lanka celebrated 50 years of the tea industry in 2017.

Whilst world tea production has increased at an average annual growth rate of 4.7 percent over the past decade to reach 5.89 million tonnes in 2018, Sri Lanka’s share in world tea production has now come down to 15.22 percent in 2018 from 16.22 percent in 2016. The declining trend in tea production due to the low land productivity has restricted the growth in tea export volume and value. The limited diversification of processed tea products for the export market is also a contributary factor that affects the growth of Sri Lankan tea exports as consumers tend to use differentiated products by targeting the different market segments in the global market.

Challenges to growth of smallholders

The performance of the tea smallholder sector since the last two decades has been declining due to many reasons. The lack of return on investment due to the low productivity of the tea smallholders’ land has been the main factor to weaken the tea supply chain which is identified as a key issue for the future development of the sector and maintaining at least the current share in the world market. 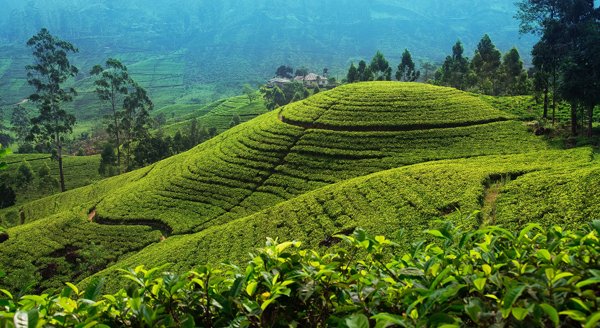 Sri Lanka’s tea smallholder sector faces several challenges as the land area confined to the traditional tea cultivation areas have remained largely unchanged and has even decreased in some places due to the conversion of such lands into more profitable commercial crops in the recent past as the price of green tea leaves has declined for some time during 2015–2019.

The productivity of tea smallholding has declined below the international standard, partly because of the predominance of more than 20 years’ old tea plants which comprise seedlings and old cultivars and those lands have become marginalized lands that are not producing economic yields. The technical solution would be to replant the lands with high-yielding cultivars.

However, the replanting rate of tea smallholdings has been very slow (at 0.8 percent) compared to the national average target of two percent per year and the costs for this process remain unaffordable to the majority of the smallholders as the government subsidy scheme covers only less than 20 percent of the total cost. Therefore, most of the smallholder farmers are not willing to replant their marginal and unproductive tea lands due to the high cost of the replanting process and the subsidy amount being not attractive especially for the people below the poverty line. Thus they are not willing to undergo the replanting process because this process requires 33 month to complete and harvest the first crops from the new plantation.

Also, the shortage of youths willing to work in the industry, the climatic changes, inefficient management of lands, inadequate extension services, poor adaptation of modern technology, natural resource management practices, long period of farmers having to stay without a main income source for 33 months during replanting period under mana soil rehabilitation are compounding factors of the problem. As a result, Sri Lanka’s tea production and its share in the world tea exports, have declined considerably as 75 percent of the tea production is attributed to the smallholders. It implies that the tea smallholding sector needs urgent and dynamic systematic reforms in enhancing productivity, ensuring sustainable household income, food security, and improving their resilience to produce a large volume of high-quality diversified products’ positioning in the world market to acquire a bigger portion of the international market.

The need for improving the tea supply chain is a must to enhance the productivity of tea smallholdings, especially the smallholders below the poverty line who have tea plantations less than one hectare and no other permanent income source. This is a long-felt need to increase the productivity of marginal tea lands.

This was the concept behind the formulation of the Smallholder Tea and Rubber Revitalization (STaRR) Project that was jointly developed by IFAD and the Government of Sri Lanka (GOSL). The project was implemented in 2016 with the financial contribution of the IFAD (US$ 23.76 million), the GOSL (US$ 34.74 million), and Beneficiary (US$ 3.6 million) to revive the tea industry and improve the livelihood and economic resilient of a large number of smallholders in six main tea production districts, namely, Ratnapura, Matara, Galle, Kandy, Nuwara Eliya and Badulla.

The project is executed by the Plantation Ministry and the State Ministry for Company Estate Reforms, Tea and Rubber Estates Related Crops Cultivation and Factories Modernization and Tea and Rubber Export Promotion . The project aims to introduce significantly faster and more cost-effective tea replanting techniques in 4,500 hectares of smallholders’ lands targeting 27,500 households including 124,000 household members through the mobilization of resources and coordination of all stakeholders to improve the value chain management process to reach the project development outcomes, to scale up the project activities into the other areas by the respective agencies at the time of the project exit.

The Smallholder Tea Development component of the STaRR project is the largest investment component that comprises interconnected development activities identified to improve the process of the tea value chain by strengthing the tea societies including those involved in processing and marketing through the Information Education and Communication (IEC) campaign and diagnosis analysis to develop society-level development plans (SDP) in line with the project interventions and provide them with capacity improvement to organize themselves as a local-level institution to participate in the project interventions to get the maximum benefit out of the project.

In line with this objective, the project has strengthened 247 societies by providing a range of capacity development programmes to improve leadership qualities, accounting, book-keeping, inventory management, community procurement , record-keeping, business management, and marketing by arranging 109 programmes and technical know-how for the implementation of 247 Society Development Plans (SDP) developed for market-driven production support for tea replanting and ultimately improve productivity and economic resilience of the member farmers of the societies.

This process has facilitated by providing required equipment, machinery, and tools for implementation of the SDP and the project has procured and supplied large numbers of equipment, machinery, and tools worth Rs 7.73 mn to the best performing 75 societies in six project supporting districts that comprise eight mechanized tea plucking machines (shear plucking), 31 pruning machines, 83 digging machines, and 59 hand-operated sprayers. As a means to institutional strengthening at the community level, the project has taken extra effort to strengthen the tea societies by developing society development plans together with business development plans to implement project activities through their members and generate the income for the society using the equipment, tools, and training provided by the project.